I received a mystery package from my friend Chris Cougill yesterday. I opened the box and saw three things wrapped in paper. What is it? I unwrapped the first to find a stack of cassette tapes with nicely typed labels. They were live Astronauts shows from the late 90s. I opened the second and found another stack of tapes. 8 tapes in all. The third was a poster I made for the record release show in 1998. For some reason I literally cut and pasted things onto the paper and potocopied it ot make the poster. I guess it was a design/asthetic choice. Or maybe it was easier that way.

These should prove interesting to listen to. Maybe I will digitize some. Maybe not. I texted Chris to thank him and he said he found them in the basement. He said he couldn't listen to them because he doesn't have a cassette player anymore. I was shocked! 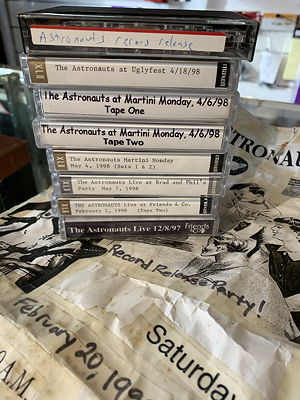